Deprecated: Function Elementor\DB::is_built_with_elementor is deprecated since version 3.2.0! Use Plugin::$instance->documents->get( $post_id )->is_built_with_elementor() instead. in /home/customer/www/art4action.co.uk/public_html/wp-includes/functions.php on line 5379
Art4Action-1 - Art4Action Skip to content
Facebook-f Instagram

DORSET BASED ARTS AND CRAFTS THAT GIVE BACK

On Sunday June 14th thirty four Purbeck artists offered their work for sale through the Art4Action online auction. 226 lots went under the hammer and raised £8,828.00, 25% of which has been donated to the Dorset Coronavirus Community Fund, with 60% going to local artists.

Art4Action was first initiated by Malcolm Lewis of Wareham Tower Chimes magazine to raise money for local charities dealing with the effects of the Covid-19 pandemic. Purbeck Art Weeks was delighted to team up, and with the help of local artists, the Art4Action auction was born.

The cancellation of the PAW Festival had left many local artists high and dry this year. ‘The event was brilliant!’ commented one artist and were ‘delighted’ it also raised £1324.00 for the Purbeck Art Weeks Charity. PAW’s coffers were depleted after the cancellation of this year’s event, so this money came at an especially opportune time for them.

Wareham Tower Chimes would like to thank all those that joined in for their support in making this venture such a success, including sponsors like Meyers Estate Agents who paid the cost of hiring the online auction software, and of course Charlotte Heath at PAW.

Malcolm Lewis from Wareham Tower Chimes. said “We’re all really pleased with the outcome. You never know when you start something like this whether it’s going to be a success or not, especially in a Lockdown, but somehow we muddled our way through and did it!”

Jonathan Greenwood of the DCF said that their cheque for £2207 will do so much good in the community as Dorset struggles with the Coronavirus and its resulting disadvantages. 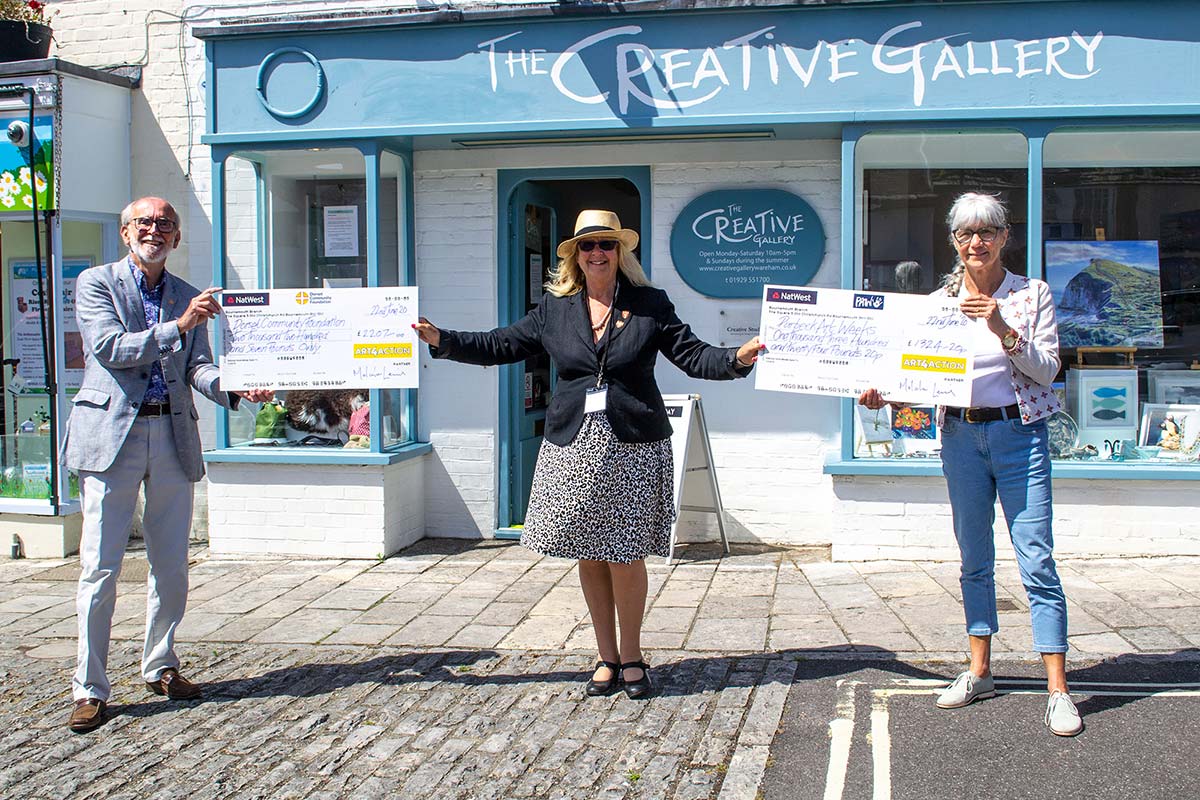 How did the Art4Action Auction come about?

In order to give the full story of how Art4Action originally came into being, we’ve reproduced here a blog from the Wareham Tower Chimes website: 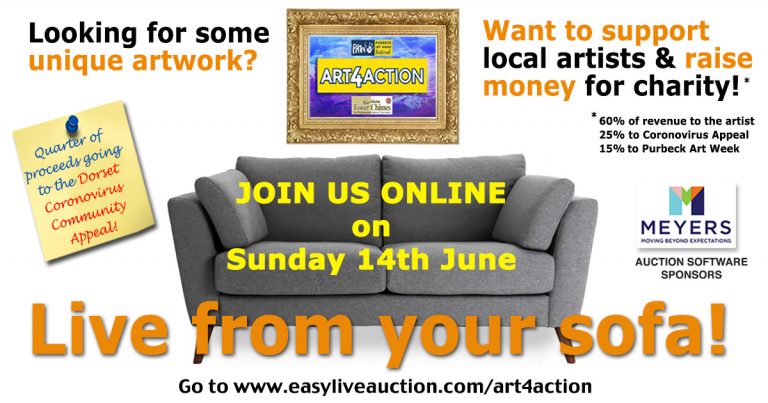 I’m sure there must be quite a few people wondering how the Art4Action auction suddenly all came about, so I thought I’d better scribble down a few words to explain about it all.

Well, it’s actually taken quite a while to put together – I first put it forward as an idea at the beginning of April 2020. Back then, (and it does now feel like back then) ‘Lockdown’ had only just been ordered, and the country felt like it was on the edge of a precipice. Walking down Wareham High Street felt like you were an extra in a post-apocalyptic sci-fi movie, and we were being constantly told that there was a chance that our hospitals would collapse through demand once we hit the ‘peak’ of the Coronavirus pandemic.

So, it was a long shot given the state of things at that moment, but I thought it would be great if through Wareham Tower Chimes – being a Council and community led publication – we could help raise some money for a local charity dealing with the effects of the Covid-19 pandemic. However, given we weren’t planning to do a magazine for the foreseeable future, I couldn’t see how it could happen…

However, by chance one day, as these things do sometimes happen, I got a random email from one of the companies that organises online-bidding for most of the auction houses in the UK. It informed me that although most auction premises were now closed, out of desperation one or two places were still operating by doing online bidding. Anyway, I started wondering if it would be possible to organise doing an auction, not of old art and antiques, but rather of newly made stuff; inviting artists and crafts people to contribute some bits and pieces to the sale?

The idea was that the artists would be free to set the amount that they donate to charity. In fact, it was an explicit part of the event that we would also be doing it to support the ‘forgotten thousands’ in this country who create art; many, who as self-employed people often find it hard enough in normal times to make a living, but at the moment, exceptionally so. I hoped that those who might buy the art pieces wouldn’t have any problem in understanding and appreciating that, as well as donating to a charity.

Not long after, I saw that Dorset council were promoting the Dorset Community Coronavirus Fund (organised by the Dorset Community Foundation), so they seemed an ideal destination for the charity element of the monies raised. As it says on their website’s page, their aim is to “…fund charities, community groups and organisations working in Dorset who support vulnerable groups affected by the Coronavirus outbreak”.

However, we still had to find a way of making the auction happen (i.e. via an online live bidding platform), so I contacted the company that had sent me that random email – Easy Live Auction. Fortunately, they agreed and even offered to reduce their normal fees for it. Like us, they just wanted to make a difference to some people’s lives in these awful times that we’re all struggling to get through.

There was a snag though! There has to be two operators to the auction system and software, and because it was very unlikely that we would find two professional auctioneers around who were also members of the same household, I would have to do it myself with the help of my family!

Ah – I hadn’t signed up for this bit! And my family took quite a bit of persuading too! But it’s amazing what these times force us to do, and they agreed to help. I even persuaded myself that based on a casual stint as a DJ on a local radio station 20 years ago that I’d make a passable auctioneer – we’ll see!

The next crucial step of course was to get the artists. Luckily, Cliff Towler, who works with me on the Wareham Tower Chimes magazine, and an artist himself, knew that the artists in Purbeck were indeed at a loose end, especially with the cancelling of this year’s Purbeck Art Weeks Festival. I contacted the charity concerned that runs the festival (called PAW). They were very keen to put it to their members, and after a short while confirmed that they had quite a number interested in putting some of their pieces up for auction.

PAW also agreed to my request that while I would carry out the actual auction, they would be in charge of invoicing the winning bidders – not something I felt that Wareham Tower Chimes should do. Once they received the monies, the PAW charity would transfer whatever proportion of the price that the artists said they wanted, over to them. The artists would then post off the items to the bidders. After this, PAW would transfer the amount decided to the Dorset Coronavirus Community Appeal.

This, along with all the work they would have to help me with in preparation, meant that it was quite fair, I felt, that the PAW charity should receive a percentage of all monies raised. In fact, Purbeck Art Weeks does a huge amount to support the arts across Purbeck, including in the community and in schools. PAW took a heavy financial hit when they had to cancel the Festival this year, and it will take some time to rebuild the coffers. Hopefully, this money could help start that process.

All of that took a month, and then we had a month until the proposed date for the auction to get everything together – the 14th of June. A manic period of getting the descriptions and photos of the artwork up to Easy Live and to make a catalogue of our own to go onto Wareham Chimes and PAW’s websites, etc., etc., etc.!

Maybe not such a mad idea!

While this might have started off as one person’s mad idea, it wouldn’t be possible without the input of many people along the way. So, with this in mind I’d like to thank the Members of Wareham Town Council who gave their official backing of the event, to Grant Robson and his team at the Dorset Community Fund, to Richard White at Meyers Estate Agents for kindly offering to pay the cost of hiring the online auction software, to Charlotte Heath at PAW without whom this event couldn’t have happened; and then hopefully to the good people of Purbeck who will show their support by bidding in the auction!

And, of course, we mustn’t forget what this event is all about. To help various groups that are struggling because of the Coronavirus, from local artists to the PAW charity, to of course, the Dorset Community Coronavirus Fund. One of the artists at the exhibition said that she could not describe how mortified she was when Purbeck Art Weeks was cancelled: “I had been working madly to get enough paintings finished and then along came this murderous virus and closed down the country. I was left sitting surrounded by work wondering what on earth I was going to do – especially as PAW is my best two weeks of the year…”.

Finally, I want to leave the last word to Grant at the Dorset Community Foundation who told me recently that: “We are just as much in need now as when we last spoke in April. We have given out over £400,000 in grants to groups assisting some of Dorset’s most vulnerable people during the Coronavirus epidemic, and applications are still flying in to us”. 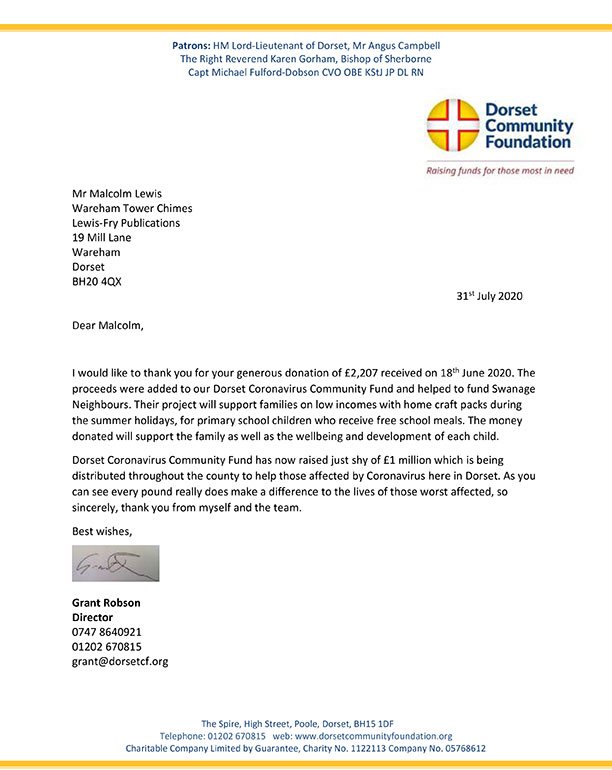